Romance was part of Goodman Theatre’s David Mamet Festival which showcases the astonishing body of work of one of America’s (and Chicago’s) greatest playwrights – from the corrosively profane to the gently lyrical, from early classics such as 1972’s The Duck Variations to his most recent hit farce, Romance. A Pulitzer Prize-winning playwright, as well as a renowned filmmaker and theater director, Mamet has a long and fruitful collaboration with the Goodman that includes more than one dozen works, beginning in 1975 with the world premiere of American Buffalo. 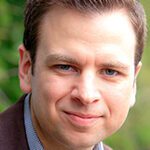